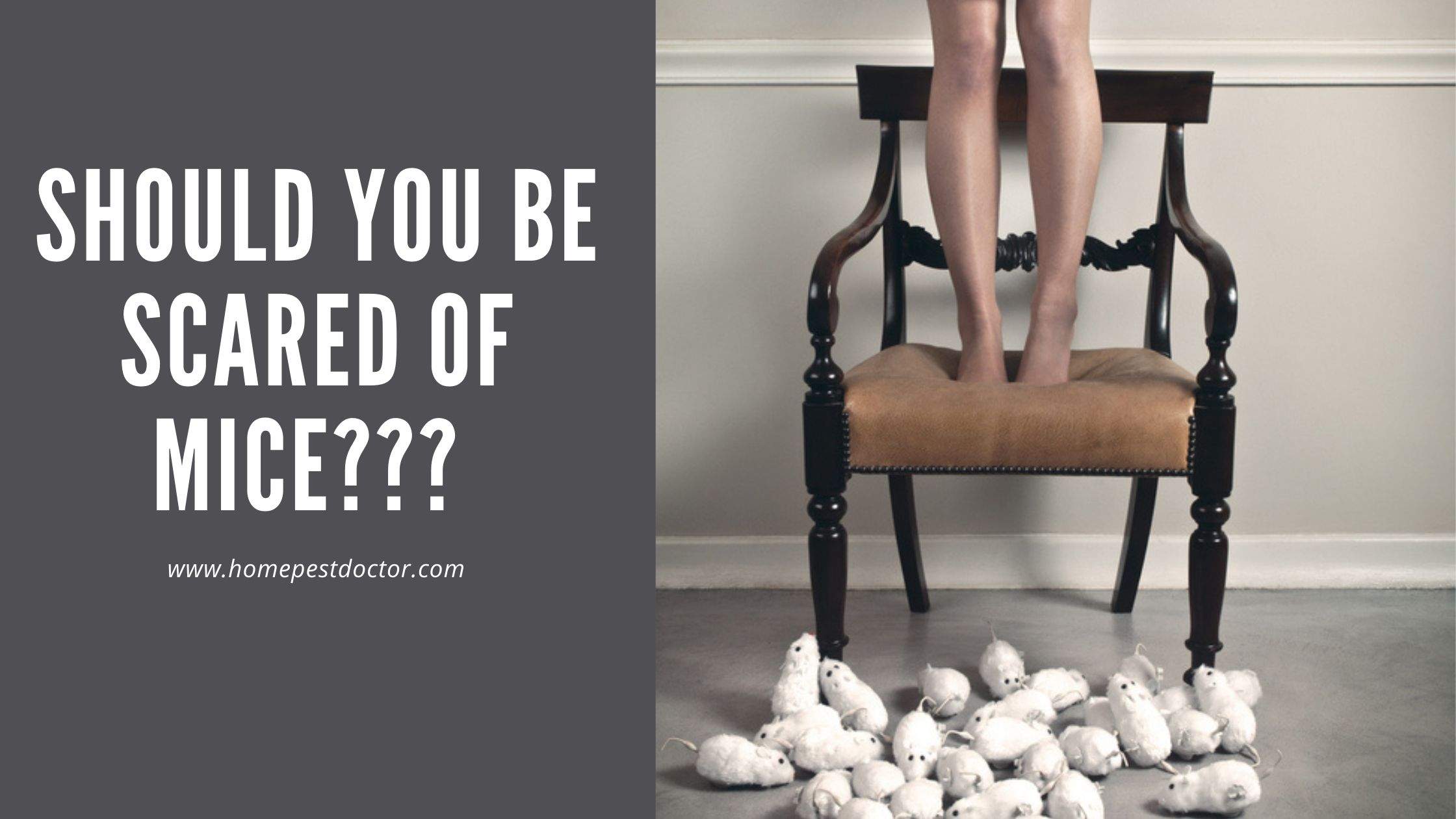 Should I be Afraid of Mice?

One of the worst feelings on earth is the scathing sound that comes from mice movements in your room, parlor, or kitchen. Imagine a slow rat movement in the middle of the night across your room just a few minutes after you’ve seen a horror movie. This brings us to several questions “are mice dangerous?”, “Should I be afraid of mice?”

Certain mice species are harmless, which makes human predators to rats instead of vice versa. Mice are generally scared of humans, so a mouse presence in your house shouldn’t get your scared or make you afraid. When you spot a mouse, you should find ways to kill it, since it would be looking for alternatives to escape instead of trying to harm you.

Since we’ve already established that mice can’t harm you, should you still be afraid of mice? Before we throw more light on this, let’s figure out if Mice are dangerous? That would at least give us a strong foundation for further emphasis.

House mice are small rodents with round ears, a pointed snout, and a scaly tail. Seeing them at first, you may think they are harmless. But once you discover what they can do in your home and to your family, then you will want to get rid of them immediately.

Note that they are not the same as pet mice. Also, house mice are not as innocent as they may look. House mice can destroy your property and can even burn your house down. Mice have the ability to invade your home to find food and shelter.

However, unlike pets, mice are not there as our playmates and for cuddles. If you ask, should I be afraid of mice? I want you to know that they bring stress and could cause serious troubles for you. And they will continue doing so as long as they live.

But by keeping your space clean and spotless will help prevent them from coming in. note that this is only applicable once they have not discovered your place yet. As soon as mice find their way inside your home, then it will be a different story. This is because getting rid of them is somewhat challenging. But there are things you should consider before you take any action. You can more by researching but it’s always best to seek professional help.

The Fear of Mice

Whenever you give someone the choice between mice and rats, such a person will likely prefer mice. For centuries, mice and rats have been anthropomorphized with most of the stories displaying mice as good and rats as bad. This is because of their appearances and behaviors.

Note that mice are smaller than rats, having larger ears and heads, and are also very curious in nature. Also, they are cuter, seemingly innocent, and not looking for trouble.

While rats, on the other hand, have coarser fur than mice, larger bodies, longer tails that look like skin, and are very aggressive in nature. The horrible thing about rats is that they eat mice.

However, despite these comparisons between rats and mice, people still fear mice because they are known carriers of pathogens. Let’s put all these aside, mice, as well as rats, can be found in dirty and dark areas, such as sewers. And they both carry fleas and other parasites which pose a threat to humans and their pets.

Remember that mice and rats are more afraid of humans than humans are of them, this makes them stay hidden and in their own habitat. One of the reasons they enter your home is that they smell food or because there is a point of entry they can access your home. In case you are asking, should I be afraid of mice?

7 Reasons Why You Shouldn’t Be Scared of Mice

Mice Are Helpful to Nature

Try as much as you can to admire and respect their amazing abilities, instead of being disgusted by them. Just compare their species to yours and you will see how many things we have in common with them. Things like:

Once you are able to study behavior mice, you’ll notice that they’re actually very clean animals that build nests, have maternal instincts like humans, and arrange their habitat to suit their needs accordingly.

Not Harmful, Mice Bite Only When Defending Themselves

Just like humans would fight back if attacked, mice bite to defend themselves. But how would you avoid being bitten? It’s just simple: you shouldn’t give them a reason to bite you. Don’t frighten, scream, or throw things on them.

Even at that, their teeth are barely big to break the skin, so don’t worry too much about being bitten by them.

Mice Are More Scared Of Us

Just as I said before, mice are more scared of you than you are of them. For mice, they see you as a giant who takes huge, thundering steps with a booming voice. Mice are just a four-inch-long critter that can barely be heard even at the quietest of times.

Whenever they bolt, it’s due to fear, and not because they’re trying to get to you. What they are doing is that they are trying to get away from you. Meaning if you just keep still, then they’re more likely to note your position in the room and run in the opposite direction.

Mice Can Be Good Friends

I know this can be hard to believe, you can actually develop a connection with mice, the same way you can with cats and dogs. Mice can become your friend. Sometimes they get excited by the sound of your voice and the smell of your skin. Also, mice get sad when you leave their presents.

Mice just like rabbits need a lot of care from you. Meaning they need to have fresh sawdust and bedding every day, they also need feeding and regular cuddles.

Mice love trying new things to eat, things like bread mixed with milk or broccoli and carrots. They also like playing with any new toy you might buy for them, even if it’s something as simple as a toilet roll tube!

Note that mice can be so much fun! Sometimes ago I even trained my mice to race up and down my staircase. They keep me entertained for hours and was much more interesting to me than sitting and watching TV or playing on the PlayStation.

Whenever you look past your initial fear, you will notice that mice are very beautiful creatures. Every mouse has its unique markings, such as freckles on a human which makes them pretty in their own way. Also, their whiskers are finer than the silk woven by a spider.

So try to learn to appreciate their delicacy and vulnerability by just seeing them in the same way you might look at a newborn baby. Look at them closely, you will see they are so small and cute.

Indeed, the mouse itself does often make squeaking noises in your home, but most time they are so low for the human ear to pick up on. You will only hear an odd squeak very often, just like the tweeting of a bird.

The only thing you will easily hear is the sound of mice scurrying around. Although this often freaks people out. But try to imagine this sound the same way as those made by any other living animal moving around.

Why You Should Be Careful with Mice

Apparently, we’ve discussed the possible reasons why you shouldn’t be scared of mice, but there are other strong points to consider.

To mark their territories, mice would have to urinate and defecate in the area they want to hold and maintain. Then due to easy access to food, they make their nests very close to a food source. This puts your food in a dangerous position of being poisoned and contaminated with diseases like Covid-19, Hantavirus, Salmonella, etc.

Even if rats can’t attack you, your delicate properties are at a huge risk. Mice are known to eat up important documents and information, which makes having them around a bad choice.

Conclusion on the question should I be afraid of mice

Whenever you come across a mouse, just try and take a deep breath, you should look at them for what they really are, that is a helpless little animal looking for some food and a warm place to live. Make sure you put your rational cap on and calmly deal with the situation as appropriate.

You can do this by simply leaving the mouse to be or by coming up with a humane way of evicting it. If you can learn to love them, I promise, you enjoy their company.

7 Shocking Reasons You Currently Have Rats in your Home [Stop Doing These!!!]

How to Get Rid of Mice Naturally in Few Steps [DIY...

7 Shocking Reasons You Currently Have Rats in your Home [Stop...

How to Dispose of a Live Mouse Caught by a Trap...