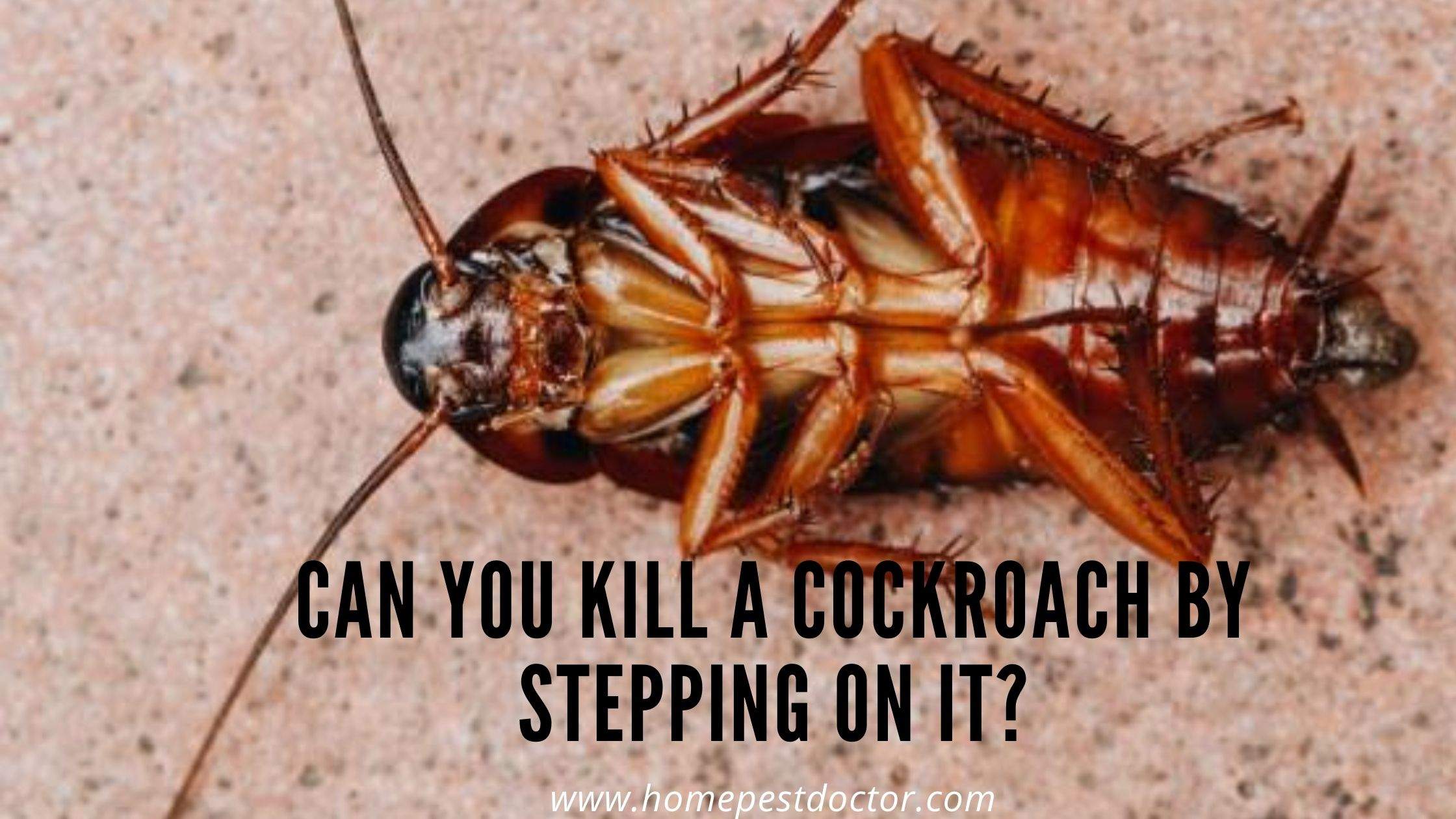 Do cockroaches die when you step on them?

Have you seen a cockroach around your house, then you are probably asking yourself, “do cockroaches die when you step on them?” In this blog post, I will let you know if you can kill a cockroach by stepping on it. We would also figure out if stepping on cockroaches is the best way to kill them.

Sometimes what you keep around in the house might invite a cockroach or two. Will cockroaches die when you step on them with the intent to kill? How easy would it be? How fast would they die? All these are what we would consider in this article.

Can you kill a cockroach by stepping on it?

You can kill a cockroach by stepping on it because it squashes the body of the cockroach and kills it instantly. Just consider yourself being run over by a car, I guess you’d die immediately. That’s what happens when you step on a cockroach; it dies immediately.

But is stepping on a cockroach the best way to kill it when you have it in such a position? I will explain further. But before that, let’s consider some other ways to kill a cockroach.

How fast would it take for a cockroach to die when you step on it?

Well, it takes just a few seconds after stepping on a cockroach for it to die. First, it would become unconscious; then, after a while, it would die. But if you want the cockroach to die almost immediately, you step on it; then, you need to apply pressure when stepping on it!

Why is it hard to kill a cockroach with your Shoe?

Cockroaches are very sensitive to their environment, and they can detect movement from them with the use of their antennas. The antennas of a cockroach aren’t just there to guide and show them where to move. According to Scholarpedia,

“Cockroach antennae has been extensively used to study the multifunctional sensory appendage that generates the olfactory, gustatory, tactile, thermal, and humidity senses. Of the variety of senses, the tactile sense is thought to play a crucial role in perceiving physical objects.

Better ways to kill a Cockroach in the house

Why this is important is that stepping on cockroaches found in the house endangers everyone around. One of the disadvantages of killing cockroaches by stepping on it is that it spills out many internal body parts of the roach and contaminates the floor.

The majority of people won’t disinfect the affected area, leaving it to contaminate other things and individuals (kids) and pets around. What are some fastest ways to kill a cockroach in the house? Let’s consider some of them;

Kill it with a Shoe

If you find a cockroach around the house without wanting to kill it gruesomely like stepping on it, I suggest you first know it unconscious, then throw it away in the yard or garden. This way, you don’t contaminate your house with a cockroach spill.

When trying to knock a cockroach unconscious, you should also be wary for it not to escape, because that would be worse. It would find a hidden place and reproduce more roaches.

This is why I suggest using a soft shoe that would knock it unconscious without messing up the floor with its spills.

Use a Flit Insect Killer.

This is my favorite way of killing a cockroach without stepping on it. Even though cockroaches die when you step on them, using a flit insect killer is a more professional way to kill and repel others at the same time. This is like using a stone to kill two beds.

Let’s assume you see a cockroach running on the wall, quickly grab your flit insect killer, and spray on it continuously. It wouldn’t kill it immediately, but after a while, the cockroach would become unconscious and fall to the floor. All you need to do is pack and throw it into the waste bin.

The disadvantage of this method

The cockroach might end up escaping from your reach and die in an unknown place. Another disadvantage is that the flit is dangerous to your health and might damage your lungs. So while using a flit to kill a cockroach, make sure you are wearing a mask. If you don’t have a mask, make sure you leave the area once you are done spraying the area.

Use a Broom to Kill the Cockroach

If you have a broom, it would also be useful in killing a cockroach without contaminating the area. A broom is also used in knocking a cockroach unconscious before killing it in a more convenient place.

If you have a cockroach infestation, using a broom will allow you to kill many cockroaches at once, leaving none of them to escape.

One disadvantage of using a broom is that you might also miss your target, and the cockroach would escape. So I suggest you aim very well and strike once and hard when looking to kill a cockroach with a broom.

For the summary of the question, “can you kill a cockroach by stepping on it,” it is now apparent that cockroaches die when you step on them. But from this article, I guess you’ve realized that stepping a cockroach is wrong to kill it – i.e. if you are concerned about the health and safety of those around you.

There are other safer ways to kill roaches – which we have considered other than by stepping on them or squashing them with your foot.