Home Insects Guide 6 reasons why flies come into the apartment 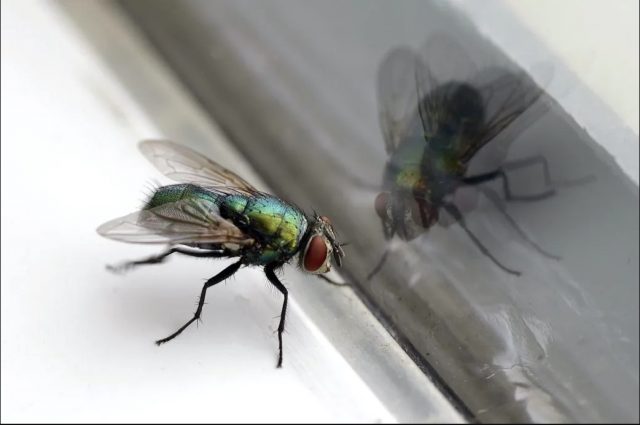 When flies buzz through the kitchen or the rest of the apartment, it is usually due to certain reasons. If you eliminate them, you can also curb the plague of flies. Why is it when the annoying pests suddenly invade your own four walls?

Flies are a particularly big nuisance in the home, especially in the hot summer months. Usually it is about the housefly or the iridescent green blowflies. But fruit flies can also quickly become a nuisance. In some cases, they can also be a health concern because they can transmit diseases. Scaring them away is usually not really effective, especially if the flies are attracted to certain things, they will soon come back.

If they then also lay their eggs in the apartment – and that can be up to 1000 – soon you can no longer defend yourself against them. The best way to prevent an invasion is to tackle the root causes. The chemical club is usually not necessary.

1. Open groceries in the apartment

Probably the most common cause of flies in the home is when they find food lying around in the open. This can be fruit or vegetables in their skins, which quickly become mushy and start to smell at the high temperatures. Flies are then magically attracted to it. But also chip crumbs on the couch or a leftover fruit juice in the glass are a found feast. For this reason, you should pay attention to cleanliness in the apartment on the one hand, and cover food or keep it in the refrigerator at high temperatures on the other.

Another unwanted attractant for the flying pests is the trash can, which has a strong attractive effect on flies due to the odor that develops in summer. Especially if it contains perishable food, it should be emptied regularly to avoid attracting flies into the apartment. In addition, the residual waste container should have a lid – and be wiped out with vinegar-based cleaner from time to time.

3. Dirty dishes in the kitchen

A third port of call for flies is dirty dishes piling up in the kitchen. Food leftovers often stick to it, which exude their scent and thus attract the pests. For this reason, you should rinse plates, cups and cutlery promptly or put them in the dishwasher and close them.

4. Excrement from domestic or wild animals

Flies are attracted not only to food, but also to cat and dog droppings. They settle on it and can also pick up pathogens that are dangerous to humans there, which they then transmit. Cat owners should therefore regularly empty and clean the litter box.

In most cases, flies enter the apartment through open windows. Of course, you shouldn’t completely do without airing in summer. However, it depends on the “how” and “when”. On the one hand, you should not air the room in the evening or at night and at the same time light up the apartment brightly. The light sources attract flies – and other insects such as mosquitoes – into the home.

On the other hand, if you have the opportunity, you should only open windows on one specific side of the apartment. Since flies like to be in the sun, they often get in through the windows on the south side. It is better to ventilate on the shady side. And the air is a bit cooler here anyway.

Tip: A fly screen is an effective and gentle way to protect yourself from insects. If you only have the opportunity to ventilate on the sunny side, you should consider insect protection.

6. Animal carcasses in the house or in the garden

If flies find a dead animal in which to lay their eggs, the population can explode in one fell swoop. This phenomenon is more common in the country than in the city – but even there can be dead rats in the drainpipe, a marten in the attic or a dead bird outside the window that has crashed into the pane. Animal carcasses are welcome breeding grounds that should be tracked down and removed quickly (or have them removed). You can usually find the carcass by following its nose. If you cannot find what you are looking for, you should contact a professional pest controller.

How to get rid of flies in the apartment?

If the flies keep coming back even though you have eliminated the causes, you can use some effective remedies – even without chemicals. In this article you can read how to drive away flies with certain plants and home remedies. The fruit flies are also particularly annoying, but there are also methods to combat the small pests. However, they should not be confused with the fungus gnats, which like to nest in and buzz around flower pots. You can also get rid of these with a few tricks, for example with a match.

Will keeping lights on Keep Roaches Away

5 tips against mosquitoes in the apartment

Drive amber cockroaches out of your house and apartment naturally